Well, here I am!! This is my very first blog post from Barcelona, Spain. Just as a warning, it will probably be pretty long seeing as how I currently do not have the ability to differentiate the important events with things that hardly matter... Another warning, I feel like my English is becoming worse and worse since I've been talking in such short fragments all the time, similarly to how the Spaniards talk to me so excuse me ahead of time.

On Wednesday at about 2 p.m., I arrived at the hotel with my family. We lingered around for a little while because I didn't need to be checked in until 3 and after check in you are not allowed to see your family. I think I regret not spending the full last hour with my family. I was so anxious to get going that I forgot to think about how I wouldn't see them for ten months.

After check in, I met up with some friends whom I had already met over Facebook - I loved them even more in person than I did over the internet! We stayed overnight in the hotel and the next day was orientation. After the orientation, at around 5 p.m., we left for a short bus ride to JFK...and waited in the airport for hours. Okay seriously the 3 days before arriving to Barcelona were the longest 3 days of my life. We FINALLY boarded the plane and headed for Switzerland where I would have a two hour layover in Zurich. Here are just some pictures (some of which Swiss airlines should really consider using for advertising, my photography skills are pretty swell). And if you are wondering what the fifth picture is, it's the high score I got on my mini plane tv on Tetris. Pretty cool, I know. 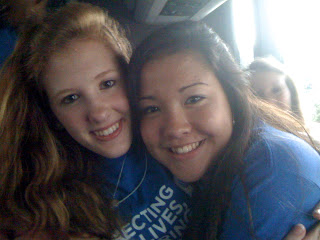 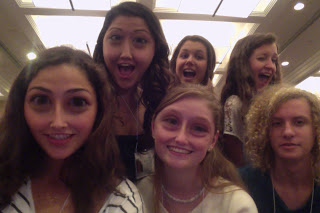 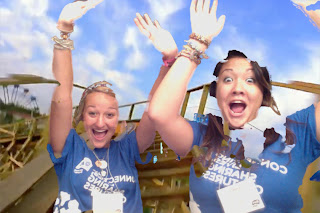 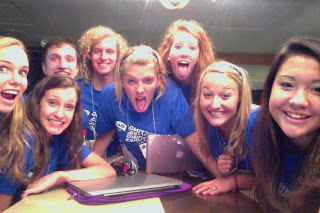 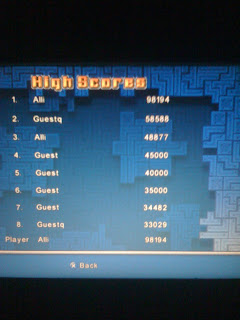 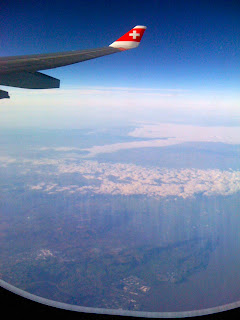 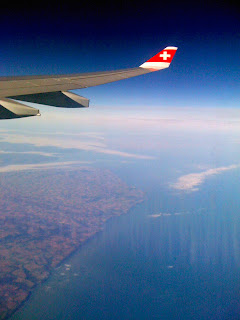 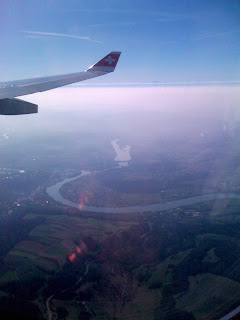 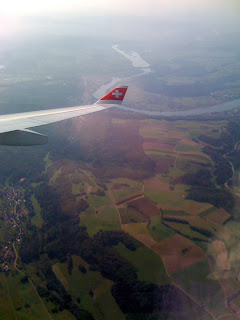 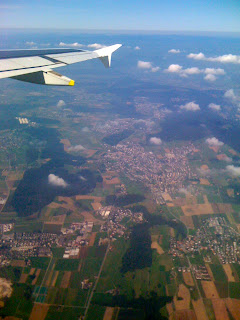 Yup, more traveling. I bet you're wondering if I will ever get to Barcelona? Don't worry, I'm wondering the same thing at this point. So we arrived in Madrid at around (American) dinnertime and it's already HOT HOT HOT. The first thing that I noticed was how room assignments were co-ed. I know that if my mom is reading this she'll probably be having a heart attack reading this. We gathered in a circle to play some ice breaker games. Typical American ice breaker games are sitting in a circle and trying to remember everyone's names or "two truths and a lie." Well not in Madrid! So everyone was assigned a number or a letter. One lucky person would sit in the center of the circle and call out two numbers or letters. Then those two people would run to the center and race to give a kiss on the cheek to the person sitting in the center, physically attacking the other person to try and win. The winner would return to his or her spot and the loser would take the place of the person sitting in the center. In America, this would be considered something along the lines of sexual harassment and no schools or groups would probably ever even consider playing this game. Me, being the ridiculously obnoxious, outgoing teenager that I am, and being assigned the popular letter Q, got really into the game and got to participate a lot. I thought it was one of the most fun games I've ever played... One hour in and I already loved Spain. We attended another orientation where I met more friends from all over the world and were given some packets of information. One of these packets had a student AFS card or something in it... well I took mine out and looked at the picture of they had me. I was confused for a little because I don't remember ever being a blonde. In other words, I got the wrong picture. It was probably one of the funniest things that has ever happened to me. Actually it's not even that funny but keep in mind how sleep-deprived I was at this point. After this we had dinner. So imagine going to a really junky camp with no air conditioning and where half of the toilets are broken. You'd expect nothing less than plastic for food, right?! Absolutely not. The food was great. The campers sang and danced until about 2 in the morning, but I went to bed a little earlier since my group left at 8 a.m. the next day. 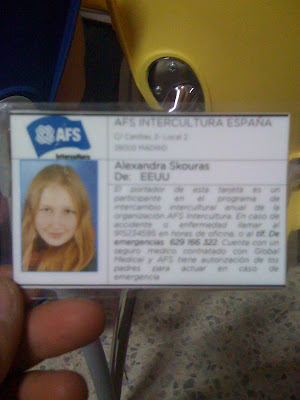 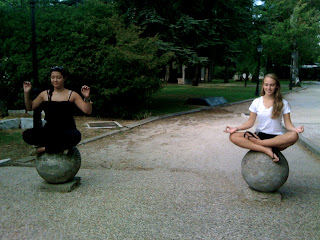 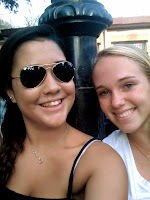 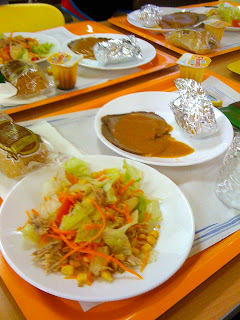 I can honestly read your mind, FINALLY. I said goodbye to my friends who were headed off to several other parts of Spain and hopped on a bus. I found out that this bus would take me to another bus... We got to this bus station and I said bye to some more friends and hopped on the new bus. Shortly afterward I was told that this bus ride would be 8 hours and I quickly became miserable. It's quite possible that I'm one of the most impatient people you will ever meet so this was bad news for me. Luckily, these buses were super fancy and had tv's so I slept and watched the Pixar movie "Up" in Spanish (it still makes me cry, even when I can't understand anything). Funny story, I was sitting next to a boy from Germany and after I woke up from one of my naps he said to me, "You sleep very interesting..." I asked him how and he said, "well I looked at you and you were like this... ;O" I think that means with one eye half open and my mouth hanging wide open. Don't worry, someone took a picture of me on the plane sleeping like this so I actually do have a picture. So in addition to learning the extent of my almost nonexistent patience, I learned what an unattractive sleeper I am.
When we finally began making stops, we realized that we didn't have an AFS volunteer with us. So on this bus were about 20 foreign exchange students with hardly any Spanish speaking ability and no direction whatsoever, trying to decide which stop to get off at. We somehow made a unanimous decision to wait until the last stop. We all got off the bus, got our luggage, and stood there for a few minutes thinking, "what now..." Nobody had a cell phone since international bills are so expensive. Luckily, we heard some yelling and looked over to see about 10 AFS volunteers coming toward us. They greeted us with the two kisses on the cheeks and directed us to ANOTHER BUS. I wanted to cry. Well not really but it was extremely frustrated. After getting off this bus the volunteers helped us carry our luggage up a large hill. I started to get nervous knowing that my house family was actually waiting for me at the top of the hill. When we reached our FINAL destination (doesn't it feel so good just to read that?) I saw my host sister, Celia, waiting for me with a lovely sign that said "Benvinguda a Barcelona Alexandra" in Catalan. I ran to her and hugged her. Let me just say that the entire meeting process was much less awkward than I thought it would be! Still slightly awkward, considering I can't participate in a single event in my life where I don't do something awkward. I actually stepped on my host sisters foot and tripped on a rock but I'd say that's a pretty big accomplishment. Then I was introduced to my host mother, Teresa, and my host father, Juan. They greeted me with big hugs and many kisses and I adored them immediately. 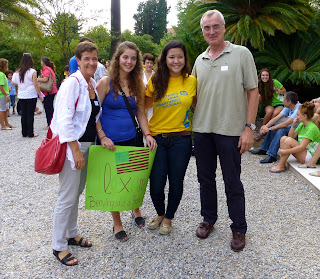 The first few days in Barcelona

We took a short car ride to the apartment where I'm living. I met Julia, the older sister, and got a tour of the spacious apartment. There are 4 bathrooms, outdoor rabbits and birds, and most importantly, a BEAUTIFUL piano. I have my own room with a lot of closet space and a nice desk. There's also a great view of a park below me!
The family let me have time to unpack my things and settle in. My emotions at this point were wild. I kept finding myself thinking, "is this really happening?" I loved everything about the family, everything about Barcelona, everything about Spain. We ate dinner around 9 or 9:30 (typical Spanish time to eat, a big adjustment from my family's 4:30 meals) and it was fantastic. Every meal since has been awesome. I predict a weight gain of like.. 350 pounds? Yeah that sounds about right. The next day we went to the beach. I felt so lucky, only the second day of being here and I'm going to the beach? I got to meet Celia and Julia's cousin named Anna, and spend some quality time with all of them. They took me to a mountain where I saw the most breathtaking views of the city. The beach was perfect, the city is perfect, everything about this place is perfect. 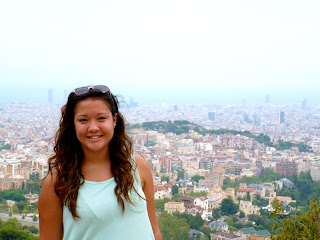 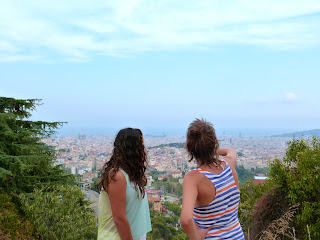 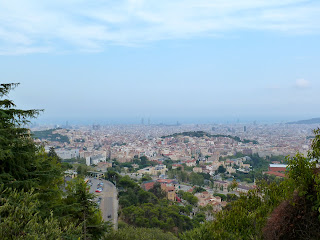 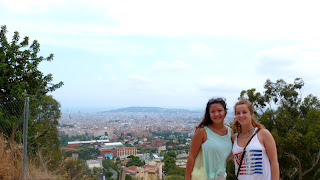 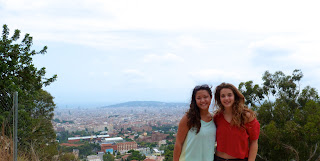 On the third day, I spent time with Celia at the Plaça de Catalunya and I got to meet some of her friends. They told me about how much everyone will want to meet me at school since I am the first American exchange student to attend this private school. I start Thursday, and I really look forward to it. Today I went to a 25th anniversary lunch of my host father's sister and got to meet more of the (large) family. Everyone is so friendly and welcoming, they remind me of my Greek family back home. It's such a nice feeling to be so accepted into this family. I even had my own table setting! (Also, the food here was amazing...) 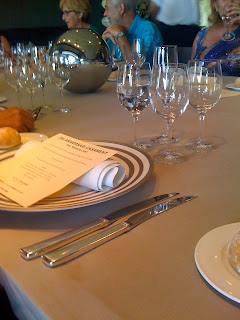 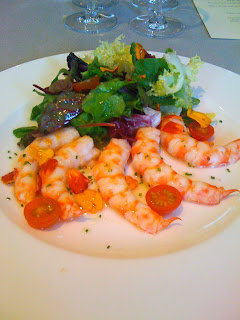 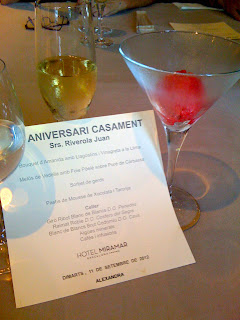 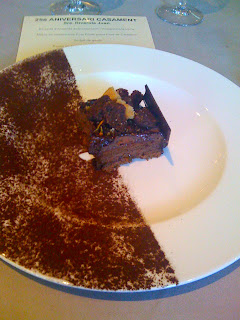 Everyone has been telling me how the first few days are always the hardest, I disagree. These past few days have been amazing. I have not yet felt homesick at all or disliked anything about the culture of Spain or this experience in general. It's pretty difficult, since I know hardly any Spanish or Catalan, but I think I'm beginning to pick it up. The first struggle was actually differentiating the two languages at all. Once I start school I think things will pick up. So for all of my family and friends back home, I hope this blog post will put you at ease! Everything here is wonderful, I couldn't be happier. :)
Posted by Unknown at 4:12 PM