Okay so for those of you who know me (which I'm going to assume is most of you if you're reading this), you must know that the combination of my brain and my mouth produces an infinite supply of words and conversation and that there has not been a single period of time of over 10 minutes of my life where I have been quiet. Brace yourself for what you're about to read, I think you'll be shocked. My school day today was from 8:00 a.m. to 5:00 p.m. and I would estimate that the total number of words that came out of my mouth was around... twenty? How is that even possible? I'll tell you how... go to school in Barcelona when the extent of your knowledge of the Spanish language are simple phrases like "where is the bathroom" and "I would like a sandwich, please."

This is a picture of me after the long day of school. 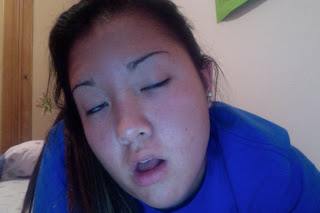