I can officially claim the title of the worst blogger in the world since it's been months since my last update... For those of you who were nearing a mental breakdown, don't worry, I'm back now and I promise to try and do better. I can't tell you how many times I've sat down and began writing a blog post but couldn't think of anything to write. Which is absolutely ridiculous because I could probably write something every single day. I guess the problem is that I'm lazy and I feel like nobody actually reads these... Anyway, considering that 2 months or so have gone by without writing anything I have decided to give this blog post no organizational structure at all, and to just bullet point things that happen to me. Maybe that will be more interesting anyway...
One more thing before I start, here are three potential ideas for upcoming blog posts: 1) A video collage of my holiday break- this one is a definite I just have to overcome my technological difficulty problem and figure out how to send videos from my phone onto my computer. 2) An exclusive look at what kind of food you'd find in a typical household here in Barcelona. 3) A video of a day in the life of an exchange student. Now I will begin with the random bullet points that describe my life. I don't feel like proofreading this so sorry.


A STORY WORTH READING

The rest of the night was great, however. We ate lunch at my friend's house and had a tour of the Sagrada Familia, which is absolutely beautiful. We hung out in a park for an hour or so after and then went out to dinner. It's really cool being with the AFS kids because we're from all over the world (Austria, Germany, USA, France, Japan, etc) and we all get along and understand each other, they're just really cool people. After dinner I went to see Les Miserables with my host mom and my host sister. I only cried a little bit though, probably because I'm so familiar with the story and have seen the musical several times slash memorized the entire soundtrack. The dialogue was in Spanish, but since it's almost entirely singing there was hardly any Spanish.

Now here are some pictures for you to enjoy and they are completely out of order but oh well. 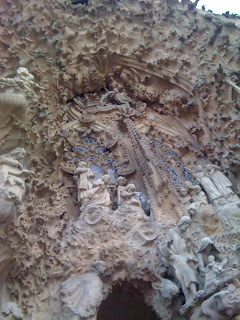